Chapter 21
All the Sights

After we finished touring Westminster Abbey, we walked around Parliament Square. 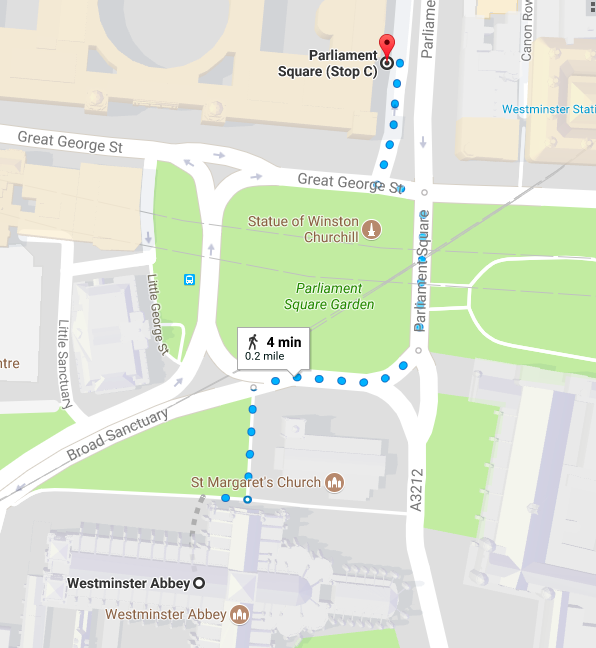 There were several statues and monuments to various titans of British history.

The various views of Parliament, Big Ben, and the Eye were great.

So, our next plan for the day was to take the hop-on, hop-off bus tour that was included with our London Pass. Rick Steves had told us that the Original Tour was the ideal one to take, but he also said that the three operators were all pretty similar. The London Pass happened to include the 24-hour ticket for the Golden Tour, so that was the one we were going to do.

To continue the running tab on whether we had broken even on the London Pass yet, the bus would have been £28 each. As of the last count, we still needed to save another £131 to make the pass worth its cost, and after the bus, that number drops to £75.

There are designated stops around the city that serve as pickup and drop-off points for all the HOHO (hop-on, hop-off) tours. The closest one to us was “Stop C” in Parliament Square. What we wanted to do was get one of the buses with a live tour guide because we’d read that the recorded tour was relatively bland. Even though the Golden Tours bus has four different routes (click the map below if you want to see it expanded), the live narration was only offered on the Blue Line — and only on certain buses taking that route. We waited as a couple other buses went by, and then we got ready to board the one that was supposed to have the guide. Unfortunately, as he pulled in, the bus driver told us that the narrator hadn’t shown up this morning, so we either had to wait another half-hour for the next guided tour or do this one and make do with the pre-recorded announcements. We didn’t really have time to wait, so we got on and accepted the canned spiel. 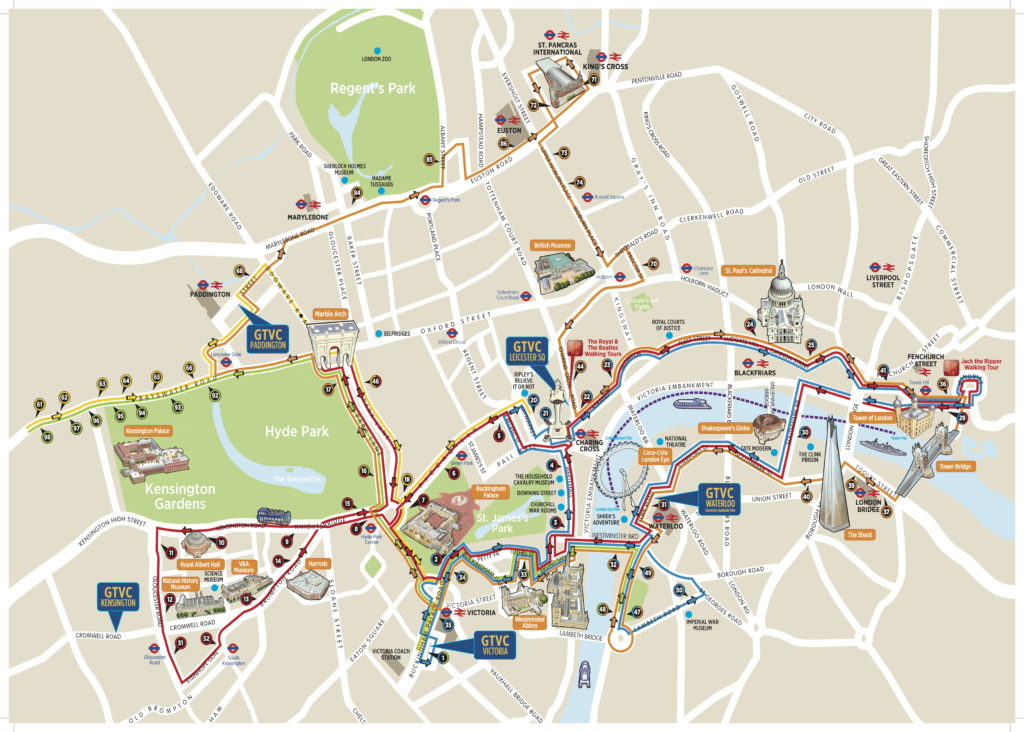 Golden Tours supplies you with really cheap earbuds that plug into the back of the seat in front of you, and you can choose from a wide variety of languages to listen to the narration. The plugs in front of our our seats were a little faulty, however, and I could only ever hear out of one ear (if at all). While informative, the narration was very dry, and it didn’t do a great job making the history of the places we were passing come alive. I would probably still like to do The Original Tour sometime with a live guide to see if it spiced up the experience.

One of the first sights that we saw from our spot on the top level of the bus was the Horse Guard standing sentry.

We were able to see the towering Nelson’s Column (the centerpiece of Trafalgar Square) even though we turned off Whitehall Street before actually approaching the square.

We passed by the Guards Crimean War Memorial on Regent Street.

Next, we continued on toward Piccadilly Circus.

If it wasn’t immediately obvious that this Times Square-esque crossing was a major tourist trap, the fact that it featured a giant Gap store and an enormous Ripley’s Believe It or Not location quickly showed its true colors.

Looping back around down Haymarket Street, we got an actual view of Trafalgar Square — including its iconic lion statues.

We started down the Strand, which took us past the grandiose Royal Courts of Justice.

The Strand turns into Fleet Street, which is the setting for Sweeney Todd. Since I directed Sondheim’s murderous musical a couple years ago, I knew to keep a lookout for the location upon which the story is based.

Since the pie shop and Sweeney’s tonsorial parlor are supposed to be right next to the St.-Dunstan-in-the-West church, I read during my research for the show that this building with the People’s Journal Dundee Courier sign is the one on which the setting was based.

Here’s a view of St. Dunstan’s.

According to plot, the second story here would house the barber shop, and the pie shop would be directly beneath it. I took the opportunity to snap a couple pictures on my phone and posted them in my cast’s old Facebook group so that they could see the location.

We passed by Ye Olde Cheshire Cheese — one of the oldest pubs in London, which dates back to before the Great Fire of 1666.

The bus drove by St. Paul’s Cathedral next. It was tough to get the whole giant building in my camera frame, but we knew that we planned to come by here again on foot sometime before our trip was over.

Here was a good view of the impressive dome.

We had officially made our way into the City of London. Yes, nomenclature here is a little tricky if you aren’t familiar. Up until now we had stayed primarily in the Borough of Westminster (also its own city) — which is where our hotel was located, in addition to major attractions like Big Ben, Westminster Abbey, Buckingham Palace, etc. The actual City of London (just called The City for short) is the oldest area, which dates back to the Ancient Romans. Today, it houses the metropolis’ financial district, as well as a few key tourist attractions, like St. Paul’s and the Tower of London.

Speaking of the Tower, you can see it straight ahead through the bus’ windshield!

When we passed by this church near the Tower, Tracy remarked that it looked exactly like what she was picturing for the Godric’s Hollow church at the end of Harry Potter and Cursed Child. I gotta admit, I didn’t have a picture in my mind’s eye for that church, but she was pretty sure that’s what it would look like!

The Tower of London was another landmark that we would obviously be exploring in more depth later in the trip. Still, it was fun to see it for the first time. As Ron Swanson points out, it’s not exactly the most imposing tower in terms of height, but obviously its purpose was much more practical and less showy. Heading here for a tour was one of the upcoming experiences for which we were most excited!

The bus route turned back west after the Tower of London, and we started making our way toward Southwark Bridge (where we would cross to the other bank). As we got toward the Thames, we could see The Shard looming across the way. We didn’t really have any plans to get much closer to this particular building over the next few days, so we had to appreciate it from afar.

The Walkie-Talkie Building was also visible for the first time.

We were fairly far away from Westminster at this point, which you can tell from the fact that the Eye didn’t look as big from this angle.

Our switchback actually brought us fairly far back in that direction before crossing the river, though.

Here’s the bridge as we turned onto it.

I thought the view from the bridge was particularly good.

And I got one phone selfie of the two of us on the bus before we disembarked at the first stop the bus made on the South Bank.